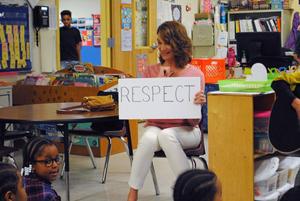 NBFA Music Teacher Damon Kelliher, Volunteers Maxine and Ira Stone and Mentor/Volunteer Monroe Fried before a song and dance performance for the students

Dancing is in her blood and so is giving back.

Monroe Fried has given her time to New Beginnings Family Academy since 2011. This has evolved over the years from short visits, to mentoring a student, to now teaching movement classes to the younger students.

“I grew with the school. Especially when the change was made, it then totally aligned with what I find important,” said Fried, referring to NBFA’s transformation four years ago to a progressive model school that is emotionally responsive to student’s needs.

Fried was first exposed to NBFA through a friend and instantly knew she wanted to be more involved. For the first year, she would come in to read to the students. An artist in our own right, Fried then began to assist with art classes for a few years at NBFA before becoming a mentor to our students.

She mentored a student for four years, from the fourth through the eighth grades before the student graduated in 2017.

“She started with me as a very quiet child,” said Fried, who has three grown daughters of her own. “We would journal. She loves basketball so we would play that together. When she left NBFA she was a confident child. It was amazing to watch the growth.”

Fried, who taught dance in Ridgefield for 25 years, has also started a movement class for NBFA’s younger students. “I learned that performing and moving built confidence and pride in students,” she said. “It is and was amazing to watch.”

Fried says of her classes that it is just another way for students to express themselves.  “I roll in some yoga and mindfulness,” she said. “You have to be mindful and meet the students where they are at.”

That isn’t all Fried incorporates into her classes every Tuesday. She has taught the students sign language that is performed alongside music and conducts salsa classes for Latino heritage month. Additionally, Fried is a member of our Development Committee and is also responsible for some of our most adorable performances at NBFA every year, such as the Mother’s Day Show and a performance of the Lion King.

“I feel NBFA is answering each child’s needs,” she said. Fried has played an integral role in helping our school do just that.