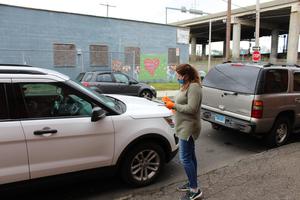 BRIDGEPORT — The caravan of cars that wrapped around the re-purposed factory building in the city’s South End earlier this month was not in line for food or COVD-19 testing.

The drivers were there for laptops — but not the still-coming 60,000 laptops promised to students of the state’s neediest districts from the Partnership for Connecticut.

New Beginnings Family Academy — because it is not a high school — wasn’t eligible for those.

Instead, piecing together grant money from a variety of sources, the public charter school handed out what its administrators say is a first round of refurbished Chromebooks to students most in need.

“Thankfully, donors have stepped up for us and supported this important and urgent need during this uncertain time,” said Katherine Beirne, a school spokeswoman.

Despite the lack of laptop support, officials from New Beginnings, like those from other charter schools in the city, say they don’t feel forgotten by the state Department of Education since the COVID-19 pandemic forced distance learning on everyone.

“Nobody could have prepared us for this,” said Ronelle Swagerty, New Beginning’s chief executive officer.

From the beginning, she said, the state has tried to address all the major concerns of its charter schools through a myriad of guidance documents.

“The state has been as responsive as possible under the circumstances,” Scalice said. And clear in their guidance, he added.

“I think we are getting as much attention and support as everyone else,” added Tyrone Elliott, director of academics and principal of the high school portion of The Bridge Academy Charter School.

In all, Bridgeport has six public charter schools that are funded directly by the state educating more than 3,500 students. And 54 of the anticipated 60,000 laptops will be distributed to charter schools in the city with high school grades.

At Bridge, Elliott said, all 280 students were sent home with Chromebooks the day in-person classes ended on March 13.

“That Monday, assignments were put up for extra credit,” Elliott said.

When distance learning became mandated, the school turned to Google Classroom and Google Meets for all of its instruction.

“We have not had any kids we totally cannot reach,” Elliott said.

On good weeks, he estimates between 80 and 90 percent of students are actively engaged with educators.

Because students can learn at their own pace and at the time of day that is best for them, no one is marked tardy to school as long as the work gets done. Unlike many other public schools, Bridge is also sticking with letter grades.

“For high school seniors going to school out of state, especially with athletes on scholarship, we didn’t want to mess with their eligibility, Elliott said.

At Great Oaks, which has 560 students in grades 6-12, laptops have gone home with about 300 students. They are in line for 14 more from the state giveaway.

“We are really proud of how our families and staff have responded to this as an opportunity to try something new,” Scalice said.

The Google platform allows for traditional instruction and small group activities and tutoring.

Scalice said between videos, assignments and video conferencing, students get about four hours of work a day.

At Achievement First Bridgeport, part of a network of schools in the state, laptops also went home with students. Statewide, that amounted to 2,800 devices. Another 64 wifi devices went out to families without internet service at home.

“Everyone who needed a Chromebook got a Chromebook,” said Amanda Pinto, an Achievement First spokeswoman.

At the time, she said, the focus was on getting devices into the hands of kids who needed them, then figure out the financial part later.

All learning at Achievement First is taking place online. Depending on the age of the student, there is a combination of video chats, targeted lessons, tutoring and group check-ins with teachers.

“I think everyone would prefer to be in person, but the online lessons I have seen are engaging, Pinto said, describing one video conference she observed between a teacher and first grader.

The student was able to defend her hypothesis that a cylinder was the best shape to use for the base of the tower she was asked to build.

At Park City Prep Charter School, a school for grades five through eight, director Bruce Ravage said families were surveyed in advance of the shutdown and that Chromebooks were loaned to those in need.

“We are very well equipped technology-wise, so we did not need any additional technology” from the state, Ravage said.

At New Beginnings, donations for the laptops came from several individuals and organizations — among them, the John Patrick Flanagan Foundation, employees at the Tauck Family Foundation, Doyle Insurance in Fairfield and academy board members. Others preferred to remain anonymous.

A survey found the lion’s share of the school’s 500 students were without sufficient home devices.

While some devices have gone out, fundraising continues for more.

Each Chromebook that goes out is equipped with the Microsoft platform the school uses for instruction. Students still without devices are learning through work packets.

Jezel Dupigny, whose son Tyler is a seventh-grader at New Beginnings, said the laptop has saved them both late nights trying to get assignments done.

Dupigny is still working, so her son spends the day at his grandparent’s house. The computer there is outdated and not equipped to open up links, she said.

“He’s doing a lot better,” said Dupigny. “He is able to get a lot more work done at my parent’s.”

He also has one computer with all his work in one spot.

During the shutdown, most of the charter schools have held their lotteries to fill spaces for the fall.

Beirne said New Beginnings had about the same number of applicants it had as last year. Most of its openings are at the preschool level.

Pinto, at Achievement First, said its Bridgeport elementary and middle schools had 840 applicants for 175 open seats. A small dip from last year, but strong, Pinto said.

“Especially with all outreach becoming remote,” she said.